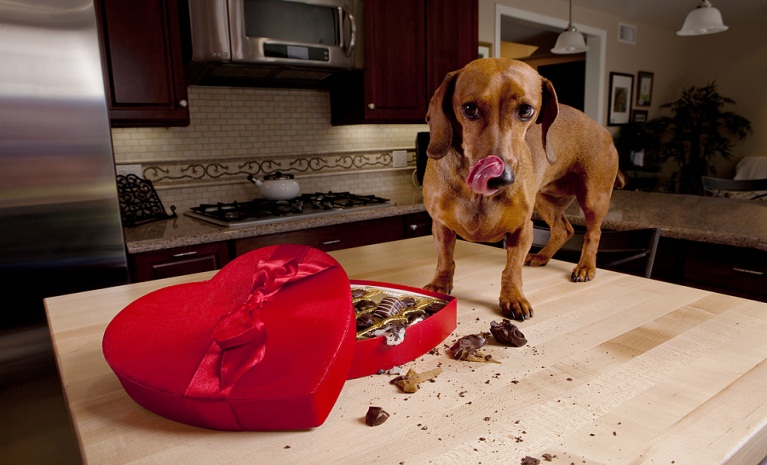 The components of chocolate that make it toxic to dogs are caffeine and theobromine, which fall into a class of drugs called methylxanthines. These are the same ingredients that make chocolate a stimulant in people and keep costumed children bouncing off the walls into the wee hours of the morning. Dogs simply are more sensitive to their effects. Where people might experience a feeling of alertness or jitters, dogs experience signs ranging from vomiting, diarrhea, tremors, elevated heart rate, heart rhythm abnormalities, and even death.

In terms of toxicity, not all chocolates are created equal. Different forms of chocolate have different levels of theobromine with the different corresponding risk of toxic effects. As a rule of thumb, the more bitter the chocolate, the more likely it is to cause a problem. Baker's chocolate, cocoa powder, and dark chocolate are the most potent and dangerous forms. Baker's chocolate being approximately 7 times as toxic as milk chocolate. The effects are also related to a dog's weight, so smaller dogs are more at risk. If your 70 pound Labrador eats a single Hershey's kiss, you're probably ok. If your 5 pound Yorkie Poo eats a bar of dark chocolate, it's time to get the keys and head to the hospital. For anything in between, just call your veterinarian. Let us know roughly how much chocolate your dog ate and we'll tell you if there is a significant risk.

Now that we've vilified chocolate, how about sugarless treats? Xylitol, a common sugar substitute is also very toxic to our pets. Xylitol is a sweetener found most commonly in sugarless gums, but also present in some candies, mints, cough drops, and toothpaste.

If ingested by a dog, xylitol mimics the effects of sugar and causes the body to release insulin. This causes blood sugar levels to plummet and can result in collapse, seizures, and death. The toxin can also have delayed effects on the liver, and some dogs can go into liver failure up to 48 hours later. In smaller dogs, as little as a single piece of gum can cause toxicity.

If you suspect your dog ingested xylitol, as with chocolate, the earlier we treat, the better the chance of a good long-term outcome.