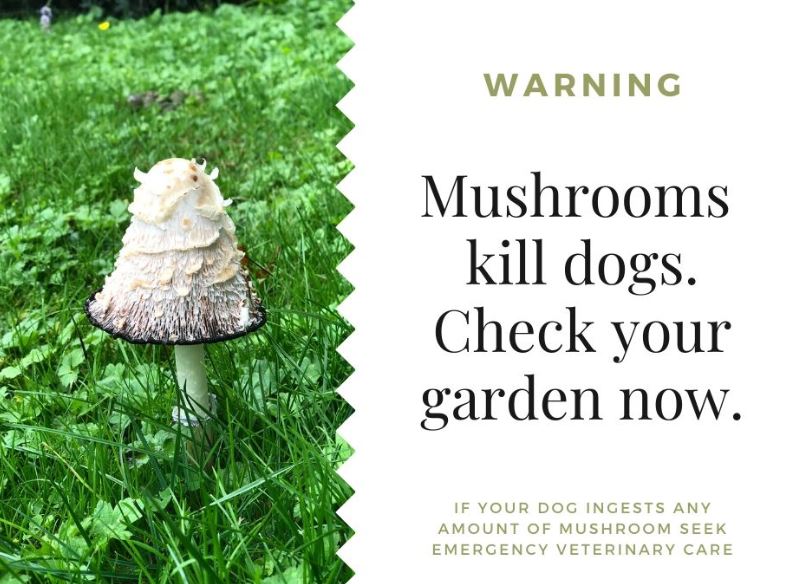 Mushrooms are a challenging toxin to deal with: they can be hard to properly identify, their range of toxicity goes from no big deal to deadly, they appear suddenly and dogs can get to them easily.

Mushrooms tend to grow during wet, warm weather, and that can be any time in spring or fall. Many species of mushrooms exist, but knowing the specific name is not always the most important aspect. There are a few categories mushrooms can be lumped into to help you remember them: hepatoxic, neurotoxic, gastrointestinal, and nephrotoxic.

HEPATOTOXIC
This is the one group of mushrooms in which knowing the name of the mushroom is important, and with common names like death cap or death angel (Amanita phalloides) it is hard not to remember them.

Amanitins are responsible for the acute liver failure associated with these mushrooms, and the onset of signs can be delayed 6-12 hours, giving owners a false sense of security. After 6-12 hours pets will start showing signs of gastrointestinal distress and then move quickly into liver failure with death occurring within one or two days of exposure in severe cases.

Unfortunately, these mushrooms can be found throughout North America and are commonly found in the Pacific Northwest, parts of California, and the northeastern part of the United States.

NEUROTOXIC
Three main groups of mushrooms will cause neurological signs: psilocybin ("magic") mushrooms, hydrazines, and isoxazole mushrooms. The onset of signs with these mushrooms is going to be more rapid; as soon as 30-90 minutes is common but less than six hours is likely.

With psilocybin mushrooms, exposures to these occur more often inside the house than outside as typically the pet has gotten into the owner's supply.

Gyromitrin is the primary compound of concern with hydrazine mushrooms. Neurological signs can be seen: weakness, ataxia, tremors, and seizures; gastrointestinal signs are typical. These mushrooms may also be associated with hemolysis and methemoglobinemia, as well as renal and hepatic involvement (rare).

Isoxazole mushrooms will cause gastrointestinal signs along with ataxia, disorientation, hallucinations, vocalization, alternating lethargy and agitation as well as tremors and seizures.

GASTROINTESTINAL
Mushrooms causing gastrointestinal signs are a relatively large group of mushrooms with signs that may be mild to severe. This is another group of mushrooms where the onset of signs will be on the rapid side, as soon as 15 minutes, but typically less than six hours after exposure.

One type of mushroom to note in this group is the muscarinic mushroom. In addition to potentially significant vomiting and diarrhea leading to hypovolemia, these mushrooms will also cause bradycardia, bronchial secretions and classic SLUDDE signs.

NEPHROTOXIC
Nephrotoxic mushrooms, Cortinarius spp, are a more elusive group of mushrooms. While reports of toxicity exist in humans, and most of those in Europe, there are no reports of unintentional poisonings in dogs or cats. Like hepatotoxic mushrooms onset of signs can be delayed (typically 12 hours but can be 3-8 days or longer). Signs would be expected to include polydipsia and polyuria, vomiting, nausea, and dehydration.

TREATMENT
Due to the potential seriousness of mushroom exposure in a pet or rapid onset of signs, worrying about the identification of the mushroom will have to take a back seat to decontamination or symptomatic care of the pet when a veterinarian is approaching a mushroom intoxication.

Once the pet is stable and if mushrooms are available for identification to consider contacting a mycologist at local college or university or the North American Mycological Association (www.namyco.org). Their website is a good source of information as well as provides a list of volunteers across the United States that may aid in mushroom identification.